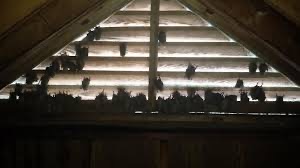 We offer Bat Removal Towns County Georgia. There are 16 species of bats in Georgia. Bats are nocturnal To find inspects or to navigate they us Echolocation Bats are beneficial to the ecosystem due to most eat insects Common areas found in our homes are Roofline openings gable vents on side of home eves Chimneys Dormers vinyl soffits Any place that is as small as 5/8 of a inch and high up so they can fall glide then fly Guano or feces is the most harmful not rabies like most have come to think, Bat guano accumulation allows for breeding grounds for microorganisms such as histoplasmosis other diseases.

Rabies bats are the leading cause of rabies deaths in the United States Histoplasmosis– is a infection caused by a fungus called histoplasma. Which is a fungus that lives in the environment, particularly soil that contains large amounts of bird droppings or bat guano. People can get this by breathing in the microscopic fungal spores from the air. Most who breathe this in don’t get sick but the ones who do may have these symptoms fever, cough, and fatigue. Ones with weakened immune systems, this infection can become severe if it spreads from lungs to other organs.

Pets can also be at risk for this as well. Salmonellosis and yersiniosis are a bacterial diseases acquired by contact or ingestion of fecal material from infected bats. Salmonellosis symptom in people include diarrhea, vomiting, and abdominal cramps. Symptoms of yersiniosis in people can include high fever, chills, headaches, malaise, and swollen lymph nodes. Cryptococcosis and blastomycosis are other fugal infections that occasionally infect bats and can be present in guano. external parasites such as fleas, ticks, bat flies, bat bugs, and mites are occasionally transmitted by close contact to the bat roosting area that have the bats infected with any of the above.

Bites from an external parasite such as a tick can transmit vector-borne zoonotic disease such as bartonellosis, erlichiosis, and borreliosis. transmission of zoonotic diseases from animals is primarily direct contact, ingestion, indirect contact with invertebrate vectors, and contaminated inanimate objects, or inhalation.

If you need Bat Removal Towns County Georgia, give us a call.